Avoid These Three Costly Mistakes on Your Lockheed Martin Pension 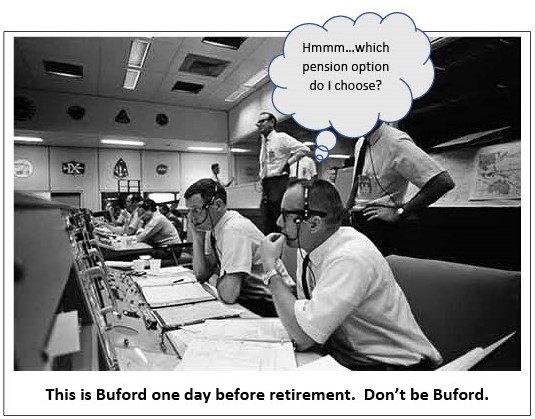 Most Lockheed Martin executives are eligible to receive significant pension benefits beginning at age 55.   However, with eight different Pension Payment Methods there are costly mistakes that can be made depending on your specific situation.

As you probably noticed, the highest pension benefit is the Life Only option because it pays out only for one life.  The lowest is 100% Joint and Survivor because the pension must pay out over two lives.  So why is this important?

Several years ago, we met with an executive who had recently retired from Lockheed Martin and had opted for the default Automatic Payment Method.  However, they had a known medical issue that would reduce their life expectancy by 20 years.  The spouse was slightly younger and expected to live into their early 90’s.

This sounds OK until you realize the surviving spouse will receive only half of the pension, in this case approximately $23,240 LESS per year, after the retiree passes.  Assuming the spouse would live another 20 years, the amount they will miss out on is approximately $464,810.  This was a huge mistake and one that could have been avoided if they had simply done a little planning BEFORE the retirement party and not after.

Now let’s look at the flip side.  What if the retiree is expected to outlive the beneficiary by several years?  Below is another real-life example from one of our clients who retired from Lockheed Martin several years ago.

In this case, both were expected to live into their early nineties, however the spouse was nearly ten years older and would probably pass several years before the retiree.  Because of this, the Life Only (highest payout) or the default 50% Joint and Survivor (second highest payout) made sense.

Our client chose the 50% Joint and Survivor option to help provide for their spouse just in case they were hit by the proverbial bus.  By the way, they started planning almost five years before the actual retirement date after another Lockheed Martin executive had introduced them to us.

Many of the Lockheed Martin executives we work with choose to retire early and supplement their pensions with consulting or other employment.  If they choose the Level Income Before age 62 or Level Income Before 65 option, there could be significant penalties because both options require retirees to take a reduced early Social Security retirement benefit starting before full retirement age in order to maintain the “Level Income”.

This should be no problem, except when you continue working.  Then, your Social Security benefit will be decreased by $1 for every $2 earned above $17,640 in 2019.  For example, if you earned $50,000 above this limit, your retirement benefit would be cut by $25,000.  Based on what some of our clients are earning from consulting after taking early retirement, their entire Social Security benefit could end up at ZERO.  And to add insult to injury, the reduced early retirement benefit is reduced for your entire life!  However, after reaching full retirement age, you can work all you want penalty free, but still at the reduced rate.

Many couples will receive over $1,000,000 in joint income from their Social Security benefits and making smart decisions about this invisible asset is important.  Using an optimized claiming strategy could add an additional $100,000 or more for a couple over their lifetimes compared to simply filing at earliest retirement age, 62, or full retirement age or even the maximum retirement age of 70.

Now, let’s suppose you still need to supplement your Lockheed Martin pension, but don’t want to go back to work and don’t want to penalize yourself by taking Social Security benefits early.  Instead, you begin taking distributions from your sizable Lockheed Martin 401(k) after rolling it over to an IRA.

This sounds like a great idea, except if you start distributions before 59 ½, the IRS considers this an Early Distribution and adds an additional 10% penalty on top of your ordinary income tax on the amount you are taking out.  There are ways around this, but also additional rules about how to do it and stay out of trouble with the IRS.

What if you are one of those people who can live on a shoestring and don’t need to supplement your pension at all.  This would then allow your IRA to continue growing tax deferred forever.  Great idea except the IRS thinks you are being greedy and they demand that you start taking distributions at age 70 ½ so they can tax it and get their money that you have been hording for years.  And if you don’t, there is a 50% penalty!

These are called extortion payments Required Minimum Distributions (RMDs).  Unfortunately, there is no way around them, and we have seen estimates on tax liabilities that can more than double after RMDs kick in at age 70 ½.  And at that age the shock could stop your heart and screw up your optimized Social Security claiming strategy.  However, with the help of a good CPA, there are tax efficient strategies that can be used to level out the tax burden and lower your lifetime “donations” paid to the IRS.